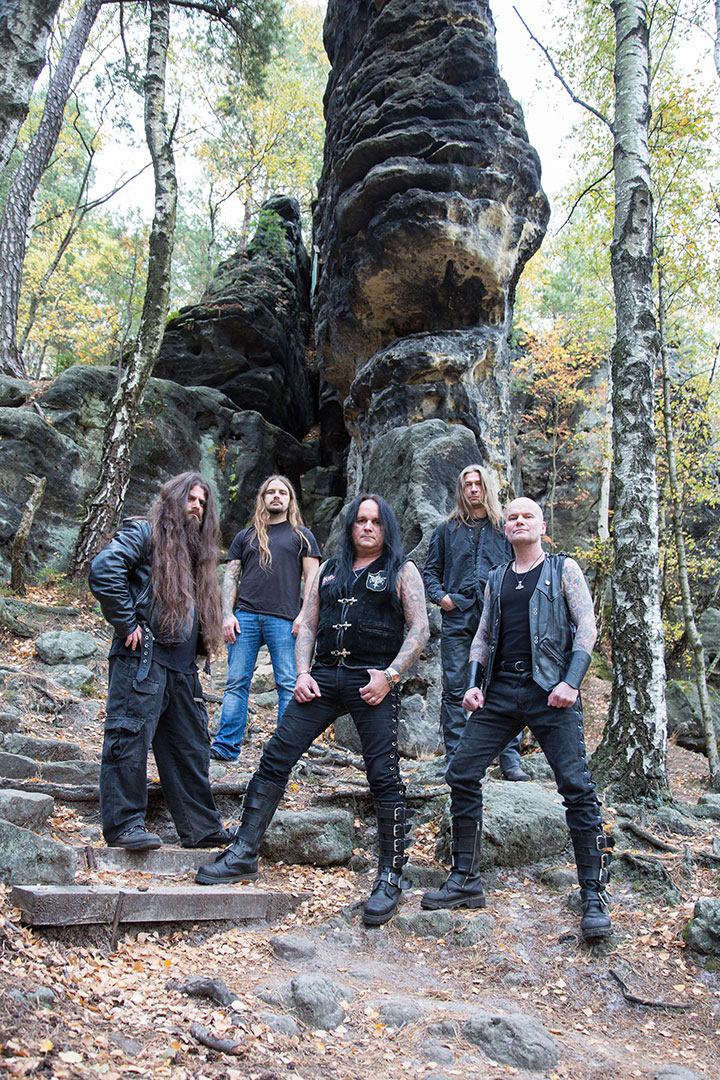 SAXORIOR were brought into being in 1994, Matthias Eschrich (vocals, guitars) and Kai–Uwe Schneider (vocals, guitars), being the only remaining original members today. The band´s name stands for „Saxon Warrior“. In the same year the band produced the first demo tape „The First Fight“. In late 1995 they released the first album „Return From The Dark Side”. Life and death, the universe, emergence and fading are the lyrical topics. In December the CD was presented by Radio „Energy“. Live shows with Eminenz, Benediction and Iced Earth were played with new keyboarder Frank Nitzsche, who is still a member to this day.

In August and September 1996 the songs featured on the MCD „Beyond Conceptions“ were recorded again self-produced by the band. The CD release party in Altenberg / Erzgebirge in October 1996 got excellent feedback.

The years 1997 and 1998 were reserved for live performances with Eisregen, Dunkelgrafen and Enslaved among others. Furthermore new material for new songs was collected. 1999 would become the most productive year so far peaking in a performance at Bischofswerdaer Open Air among many other live shows. Also „Portent of Eternity“ was released by the underground label G.U.C.. It features many key elements still present in SAXORIOR´s style today.

A quote from „Legacy“ 03/99: „They offer a great mix of Black and Pagan Metal. Aggressive high speed parts are contrasted with solemn instrumental passages and sounds slightly medieval, the keyboard emphasizing the mood of the songs. SAXORIOR have managed to release an album creating such an epic, thrilling atmosphere that in your mind´s eye you see warriors riding across the battle field to fight a glorious fight for honor and freedom.“

„Hagen von Tronje“ was presented on an Ablaze sampler gaining the bands loads of recognition.

SAXORIOR dedicated the first half of 2001 nearly exclusively to songwriting to record the third long player „Saxot“ in June. For the first time this album contains a cover version, Mike Oldfield´s „Tubular Bells“. Most of the lyrics deal with the epoch when Saxonia was christianized. Wittekind and his arch nemesis Charlemagne play an important role in this. Also parts of the Nibelung saga were given a special treatment by rearranging the overture of the Richard Wagner opera of the same title . In September, despite a lengthy absence from the live stage, the release party at Dresden´s „Flat Black“ also featuring Eminenz and Minas Morgul turned out to be a successful event.

The following year was filled with live shows throughout the German federal territory. Highlight of the year 2002 was the „Under The Black Sun“ festival near Berlin joining Roots, Lumbugre and Taake.

In 2003 the vinyl album „Von Rache und Schmerz“ was released in a limited edition of 500 copies. The special features of the record are cover version of AC/DC´s „For Those About To Rock“, sung by Gorgoroth, singer of Baltak (Australia), and a live recording on the B side. The second half of the year was mainly devoted to recording the next album „Never Ending Battles“ apart from a few live shows.

2004 started with a live show at Dresden´s Scheune club together with Dew Scented and others. The material recorded at this occasion was used to produce a live clip for „Fire of Retaliation“ for SAXORIOR´s website.

In March the new CD „Never Ending Battles“ was released by Battlegod-Production (Australia), the band´s new label. The events of the 30-year war in Saxony are the main focus of the album, which is rounded out by “Dem Meister“, a piece dedicated to Richard Wagner, which uses a few themes from his body of work.

2004 and 2005 were exclusively dedicated to live shows. Highlights were a show with Belphegor, the „Bands Battle“ in Stavenhagen mit Thyrfing, Raise Hell and Centinex, the Devil Days in St. Leonhard (Austria) with Benediction, Mystic Circle, God Dethroned among others, the Chronical Moshers Open Air in Reichenbach/Vogtland with Vader, Disaster as well as the charity show in Dresden for the benefit of children suffering from cancer. At the SIM EVIL band contest ranked SAXORIOR 7th among more than a 100 bands, which enabled the release of „Never Ending War“ on the corresponding Rock Hard compilation.

Finally the label managed to organize an appropriate distribution partner, Twilight, and by late summer 2006 the recordings for the new album „VÖLKERSCHLACHT“ commenced. It was released in December 2007 gaining so much positive reviews, that the Digipak version (including a cover of the KISS song „Creatures of the Night“) was sold out in no time.

A quote from Interregnum-Musik: „When you only have mediocre amateur material it´s easy to grow beyond your limits, but if you are already fighting at the forefront and then surpass the previous work, that´s worth a bow. “Völkerschlacht“ is an album full of anthems, sonic paintings of battles, angry outbursts of Pagan Metal, intoxicating high culture of the guitar. The songs seem to overflow you and carry you away in an undertow. Still you are able to acknowledge all the adorable details, that make the new SAXORIOR record so unique….“

Since 2008 SAXORIOR have found new allies in terms of music and personality with Andy on drums and Thomas on bass. The new line up´s first show was completed successfully at the Interregnum Festival in Gnoien on 05.08.2008. Thus the line-up was functional again, up to this day, re-energized for the band´s 15th anniversary with fresh metallic energy ! The following years went by a little less hectic. Live appearances like METALFEST 2010 (with BEHEMOTH, SEPULTURA, MARDUK, DEICIDE, ARKONA and many more) were highlights. During this time the first deliberations and research for the new album „SAKSEN“ began. The title and the general concept were agreed on pretty early on. The “time voyage” to the issue of the Saxon migration proved to be quite time consuming, as everything was meant to be authentic yet entertaining. The first demos were recorded as early as 2013 at the band´s home studio.

On 27.9.14 SAXORIOR played their 20th anniversary show as an open air in Dresden and everybody involved euphorically celebrated along! By the end of 2014 a new strong business partner was found with EINHEIT PRODUKTIONEN reinforcing the motivation for the album production and a new musical future!

In 2015, after eight years, the successor of “Völkerschlacht” came out: SAKSEN! Das first album in the most stable line-up to date.

In the years following SAXORIOR were able to land a few “bigger gigs” with high caliber acts such as the Darktroll Festival, Raknarök, Barther Metal Open Air, the first Pillorian tour.

The first basic ideas for the next studio effort came about mid 2017. For various reasons the work on the new material was delayed thus concept and demos were completed in late 2018 and recordings for “Hem” (old Saxon for “home”) could start. In terms of music this album will be a bit heavier than its predecessor and lyrically it will deal with the „Sächsische Schweiz“ (Saxon Switzerland), its formation, the Hussite wars and a few old legends. A mid 2019 release is scheduled so commemorating the 25th band anniversary...