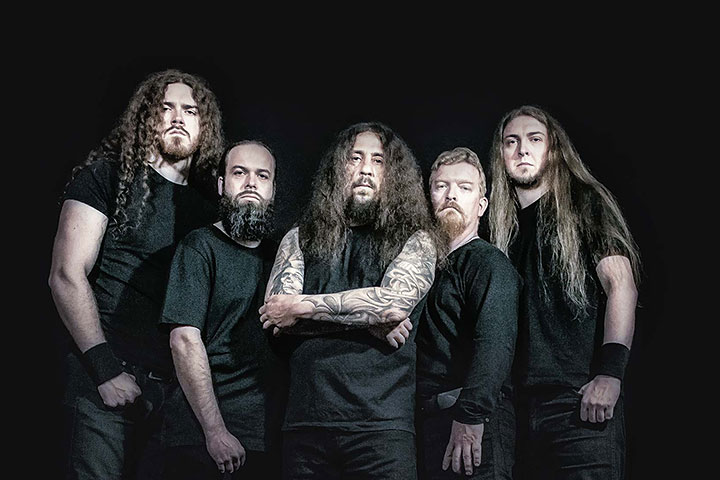 When drummer Torsten, guitarrist Christian and keyboarder Andreas finally crossed paths in 2000 after a few years of silence, shortly thereafter the three Eastgermans decided to found a band of their own. The musicians had already played together before in various bands. After the usual changes in line-up the first original compositions came together and the band´s name Thrudvangar cristalized – followed by the first live gigs. In 2002 the ambitious squad released their first CD featuring five compositions on their own. Two years later, after some more touring, Thrudvangar put out their debut full length album, entitled „Ahnenthron“ – many good reviews from the specialized press as well as the underground were the consequence of this brave Viking Metal manifesto. Yet the line-up roundabout had not come to a standstill with Thrudvangar – long-time friends of the band Kanne, Gunther und Matze joined. Quickly those pagan warriors established themselves onstage. The Thrudvangar team, now a tight unit for the first time, played bigger shows such as the Ragnarök Festivals in 2005 and 2006, but also the Ultima Ratio Festivals of the same years as well as the “close to nature” Rock For Roots Festival 2005. At the turn of the year 2005 the boys commenced the recordings for their second studio album, when the following record deal with Einheit Produktionen let the glowing pagan hearts of everybody involved beat faster. A very successful performance at the cult Pagan Nights Festival deep in the heart of the Bavarian forrest was only the harbringer for the second longplayer „Walhall“, which saw the light of day August 11th 2006. With more club shows scheduled and more festival appearances Thrudvangar substantiated their high profile. Exactly in time for Julfest 2006 the re-release of „Ahnenthron“ came out via Einheit Produktionen, who had the record remastered and added bonus tracks. An extensive as well as successful tour of Europe with the Russian Nomans Land followed. Then our Eastgerman warriors started working on the next album „Zwischen Asgard und Midgard“, which saw the light of the Pagan world in the autumn 2007. And again press and fans embraced yet another masterpiece penned by Thrudvangar. In January 2008 the Viking squad played another tour, which also brought them to the Netherlands, Switzerland the Czech Republic, with their good friends in Nomans Land as well as the the Czech forrestmen Trollech. To accompany the tour Einheit released a limited 7“ picture disc in Cooperation with Nomans Land, which is a rare collector´s item today. Summer 2008 saw Thrudvangar in full volume on the Rock For Roots Festival as well as numerous other festivals. Again the band started working on new material in their own studio called Blackinsound. Their fourth album is set to become a concept album about the famous historic figure Erik the Red. Release is scheduled for Autumn 2009 with a limited special edition double CD including a video clip. A DVD will feature rare live material of the brave horde and an interview with Markus Eck. Thrudvangar will support the release of their new album bullwark with their usual intense stage attack. We really can look forward what will befall us from these blokes!