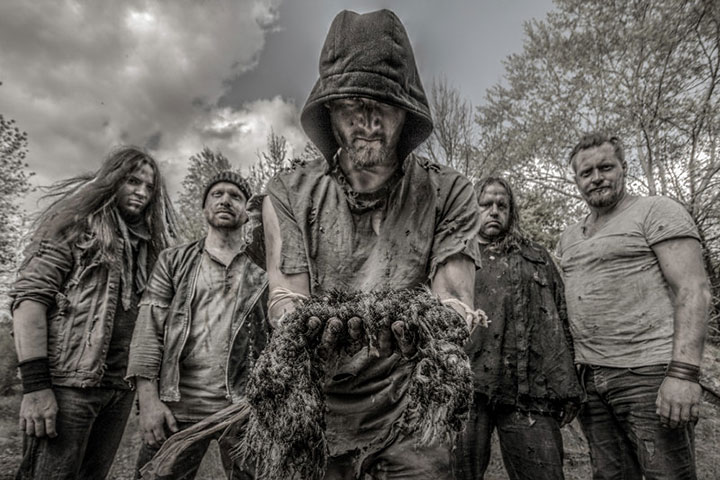 Thakandar was founded in 2008 by Xorg (vocals), Kelrath (guitar), Anzuhl (bass) and Torrent (drums). The name is a variation of Robert Jordan's fantasy epic "The Wheel of Time" and describes an area of land,"Thakan' Dar", in which the evil has entered. In autumn 2009 the first demo "Unleashed" was recorded and released. This one is still more orientated towards Death Metal with Black Metal influences. Shortly after the recording, Kaikas joined the band and played the second guitar. At the beginning of 2012 the EP "Shattered" was released. This one shows much more black metal influences than the demo. In the middle of 2015 Anzuhl left the band and Kaikas changed from guitar to bass. In August of the same year a new guitarist was found in Zavragor. In July 2016 Kaikas left the band. Shortly afterwards, Argui completed the band as the new bass player. In November of the same year the first full-length album "Sterbende Erde" (Dying Earth) was recorded in Studio E by Markus Stock. In February 2017 Torrent announced his retirement from the band. Shortly afterwards the band signed their first record contract with the label "Einheit Produktionen". In April Marlek (formerly Eïs) joined the band as the new drummer. While the band used only English lyrics on the first two releases, now German lyrics are available on the album "Sterbende Erde", with one exception.

“Sterbende Erde” (Dying Earth)
After the release of the first demo in 2009 and an EP in 2011, the five musicians have taken a long time to compose a complete album with selected songs and a strong atmosphere. It was especially important that the songs complement each other to tell a whole story. Recorded, mixed and mastered on November 20, 2014 in the sound studio "Klangschmiede Studio E" under the direction of Black Metal mastermind Markus Stock (Empyrium, The Vision Bleak, Sun of the Sleepless), the album will be released on october 20th 2017 under the label "Einheit Produktionen". With this album the band has completely given up their Death Metal influences and completely dedicated themselves to (Melodic) Black Metal. Thakandar is often compared to bands like Helrunar and Eïs.

In addition to the members of the band, several guest musicians were also involved in the recordings.In the only English-language title "Signal of Sorrow" a cello was recorded in the rehearsal room of the band, played by Lestaya (Ferndal). You can hear the Voice of Ricarda Krabbemeyer in the songs "Hinter dem Schatten" and "Signal of Sorrow". She also recorded the piano in the title "Todesmarsch II: Verbannung". Furthermore, there are keyboard parts performed by Alboin (Eïs, Ferndal) in the titles "Sterbende Erde", "In der Asche der Alten" and "Todesmarsch II: Verbannung". A special concept has been developed for the lyrics, which turns out to be a red thread through all titles: In a postapocalyptic world the last scattered remnants of human civilization fight for their survival. The listener gradually realizes that the people have their own fault to repay. After every new beginning the renewed ending is doomed again by decadence, waste and greed. The band is inspired by Stephen King's "The Dark Tower" and Dan Simmons "Hyperion / Endymion". The album "Sterbende Erde" is a work full of pictorial metaphors and a decent portion of social criticism. Packed in the robe of Melodic Black Metal, which is not only for fans of the genre, but also for newcomers.