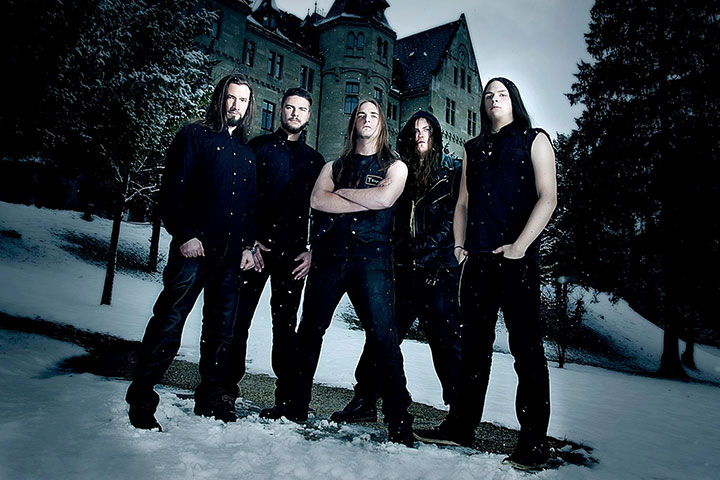 In the dark quarter of the year 2005 two shady figures from Austria, both fed up with modern civilisation, began asking themselves, how it would be to take some musical instruments and proceed to an unholy place in order to abuse them with every trick in the book. Mighty Pagan Metal was what they had in mind and so it happened. Soon both subordinate blokes hailing from the alpine republic found out that the project did not have the desired attractiveness as a two-piece. Therefore another wild warrior with the intimidating voice of a really aggravated ice giant joined the fold. Now the arch-Pagan Metal battle horde stood upright against the storm: consisting of a boisterous drum beater, a mad string ripper and an angry shouter, ready to fight – about to scare the living hell out of the world out there. Said world proved to be a bit to big for Bifröst back then, yet only a tiny bit to big and the determination of our conquering heroes again still a bit to small. So they retreated to a mossy troll cave to ban their harsh Pagan sounds to a catchy sound carrier. This pretty elaborate undertaking occupied everybody for a few months, but after some busy times the young berzerkers returned to the bright day light, proud to have created a powerful opus full of content. These gruff fellows still consider it to be their highest goal to bring rebllious Pagan Metal efforts to the people and play entertaining shows in front of as many crowds as possible. As the ancient gods are well-disposed towards the staunchly commited Bifröst horde quite a few very successful live shows were played, countless beer mugs were emptied and new anthems resulted from the great, raw power of hop intoxication. Exactly these timeless, great songs have now been put onto another sound carrier, with the active support of musician and producer Stefan Traunmüller in his professional sound forge – the sensational, brandnew mighty deed of an album „Heidenmetal“ now tells about the enormous musical abilities of the über-talented Bifröst gang. Again the unspoilt mob of musicians bravely set out to find support of an adequate label as soon as possible and scatter the sounds of the new CD to the four winds – established East German record label Einheit Produktionen had exactly the right instinct and after the successful contract signing both parties now look forward to a successful and fruitful cooperation. Only a few Pagan brigades this talented can be sighted and heard on the scene of the genre – „Heidenmetal“ will take the hearts of all Pagan Metal disciples by storm!

After a creative hiatus of approximately three years Bifröst are back with their new opus "Tor in eine neue Welt". The album contains 13 tracks in the truly epic playing time of one hour and twelve minutes. "Tor in eine neue Welt" is full of songs brimming over with catchiness and recognitive value. These songs could not differ more from each and they work without any lyrical cliches. In terms of quality this work is second to none of the international greats, also due to the excellent mastering of Krystian König. The listener gets a diversified, extended audio experience which can also impress live onstage. This can be attributed to some structural changes within the band as apart from new vocalist Ragnar (Selbstentleibung, Flammensturm) also the positions on drums and rhythm guitar have been filled with new musicians. Bifröst are now back with this new strong line-up around songwriter and founding member Matthias S., ready to shake the bulwark of metal in its foundations. With "Tor in eine neue Welt" the five-piece does achieve exactly this and places a absolute milestone into the band history.

After the huge success of their previous albums “Heidenmetal” in 2010 and “Tor in Eine Neue Welt” in 2013, Austrian epic pagan metallers Bifröst will release their upcoming 4th full-length album. Varied, refreshing and breathtaking, Bifröst’s long awaited new album “Mana Ewah” will be released in CD edition via Einheit Produktionen on February 5nd. Moving between melodic death, pagan and black metal, “Mana Ewah“, the ‘Eternal Man’ is an album you should not miss!