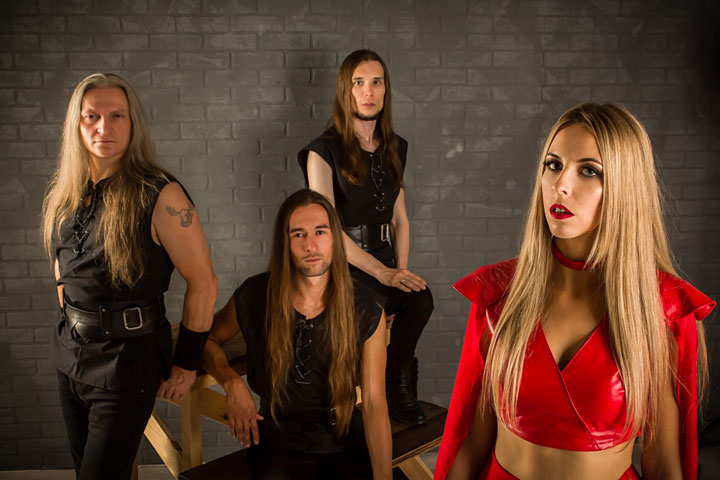 Here we have on the most promising Epic Folk Metal acts from Russia at all! Filled with the most charming female vocals within the powerful instrumentations, Alkonost have established themselves as one of the most unique bands on this globe, too. Alkonost was founded in 1995 by Alex Nightbird. He had many ideas of music which would be based on European medieval music and Russian folk melodies. Alex Nightbird composed and financed the first two albums of Alkonost („Songs Of Eternal Oak“ and „Between The World/Mezhmirie“), and he has been the author of most of the songs of the album „Put Neproidenny“, partially the author of the songs of other releases, busy Organiser and much more. In September 2003 Dmitry Sokolov (ex-member of Flaming Hate as Anton) officially entered the band as second guitar-player. At the end of 2003, the band signed on with Soyuz label (Russia) for the re-release of the 2002 “Alkonost” CD. In 2004 Alkonost continued the extensive touring, performed in Folk Metal Fest-2 in St. Petersburg. In August 2005 Alkonost went to studio for the recording of the next full-length Russian album named “Put’ Neproydenny” (“The Path We’ve Never Made”). The album was mastered in famous Moscow studio “CDM-records”. Finally “Mezhmirie” and “The Path We’ve Never Made” were released by Metallism Records in spring 2006 and in April-June 2006 Alkonost started a big Russian tour in support of “The Path We’ve Never Made”. Vic Records bought the rights of these 2 albums for a world wide releases (except the former Sovjet Union). Meanwhile CD “The Path We’ve Never Made” continued to get good reviews and finally it took the 1st place in one of the most significant Russian metal-charts – "Top Metal Album-100! Vic Records released both 'Between the Worlds' and 'The Path We've Never Made' in 2007 in the rest of the world. Both albums own a multi media section with videoclips. In 2009 Alkonost and well established German Pagan/Viking/Folk Metal specialists Einheit Produktionen got the band under a label-contract for the new sensational studio album feast “On The Wings Of The Call” – truly marvellous new compositions with extremely noble class, will spoil the ears even of the most sophisticated fans!