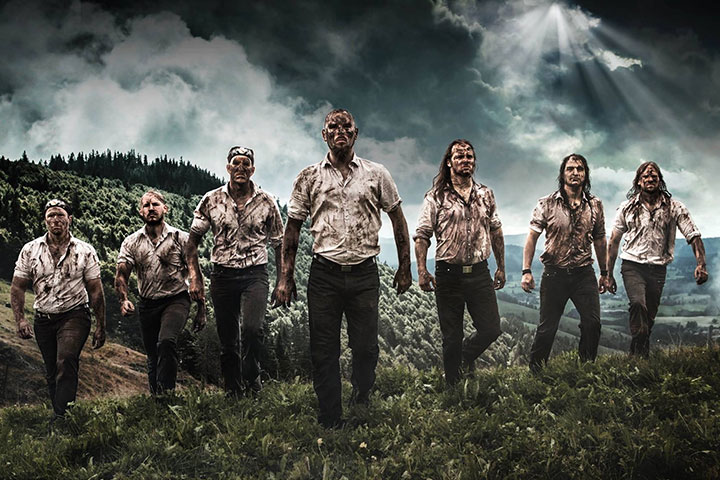 In late 2004 four guys from the Black Forrest (Germany) had the idea of forming a new band. The initial members were Tobias Weinreich (bass), Sebastian Scherrer (keyboards), Marco Schomas (vocals) and Simon Schillinger (guitar). As the band´s line-up was not completed yet, rehearsals had more the character of songwriting sessions. This way quite a few songs were composed in the first months.

As the accordion was part of all songs the band decided to include a full-time player named Johannes Joseph early 2005. Despite the fact that a drummer and a rhythmguitarrist were still missing all band members eagerly wanted to perform the songs they had written so far. May 2005 Finsterforst first entered a rehearsalroom.

The quest for an adequate drummer remained unsuccessful. During the next summer the band thought of recording a few songs, even though chances for live shows were slim because of the drummer problem. Time went on and in October 2005 rhythmguitarrist David Schuldis joined the group. Motivation for studio recordings grew immensly, so the band booked IGUANA-STUDIOS in Buchheim (March) in order to record three songs. After a few weeks of preparation the band finally managed to spend a few days in the studio recording three of their songs.

After releasing their EP „Wiege der Finsternis“ in March 2006 the band put even more effort in searching for a drummer. More time went on without anything noticable happening, but in October the wait was finally over. Cornelius „Wombo“ Heck took over the vacant position as the drummer. Now the band concentrated on rehearsing their material to prepare for live gigs. After some onstage time the debut album "Weltenkraft" was produced in February and March 2007 and finally released in July of the same year.

While Finsterforst continued playing shows more songs came about. Five more epic, grandiose and mighty songs saw the light of day. These songs were recorded July 2008 again at Iguana studio and will be released via Einheit Produktionen February 2009 under the title "...zum Tode hin".