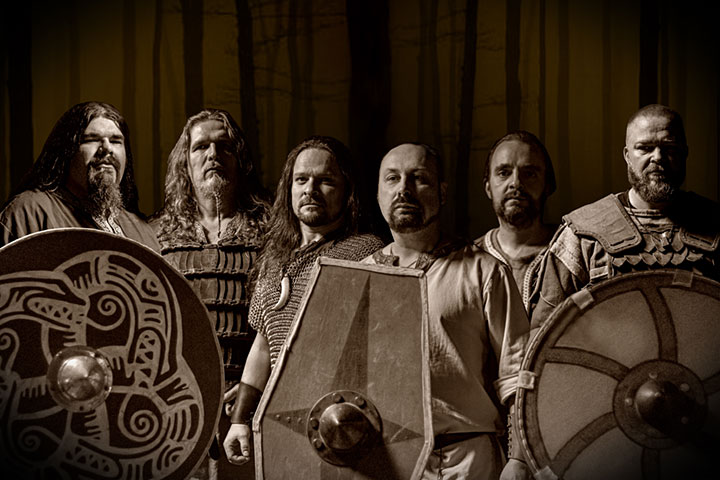 XIV Dark Centuries evolved 1998 after some line-up changes of another band. 1998/99 six new songs were put on tape and the “for your god” demo was created as the first sign of life for the new musical formation. As the band always considered themselves a live act first and foremost they performed numerous shows among others with Menhir or the Apokalyptischen Reiter and in 2000 they performed on the PartySan Open Air. In April 2000 the guitarist at the time left. He was replaced shortly thereafter by a competent musician, who took over most of the compositional work since then. A second guitar player was added to the line-up for the growing number of live shows. He brought in even more new ideas and his addition proved to be an advantage for the live presentation of the songs which were becoming more and more complex. Finally the recordings for the first completely self-produced demo CD entitled "Dunkle Jahrhunderte" were completed in June 2002. This CD contained a few unreleased older titles, a cover version and a brand new song. Between December 2002 and March 2003 the band again retreated to their studio were they tracked their first real full-length "...den Ahnen zum Gruße...". This record offers 13 pagan songs from the years 2001 and 2002, which sound more polished and professional compared to the previous recordings. The band describes their musical style as “Thuringian Pagan Metal”, using clean vocals as well as Death or Black Metal influenced vocals. The German lyrics deal with stories and myths of our ancestors and their natural religion. In June 2003 the band signed a three-year deal with the Austrian label CCP- Records, which released the self-produced debut all over Europe under its banner in September of the same year. Between late 2003 and 2004 the band toured a lot in Germany to spread the songs and their message. In the fall of 2004 the first gigs abroad were played, more than 100 live gigs altogether until now. A lot of new high quality material had been written at the time but only a limited time frame for recording was available, so it was decided in October 2004 to record a five track MCD entitled “Jul”, which was released by CCP records in June 2005. This record only received positive reviews, as the band had brought its style to perfection. The music contains more folk and acoustic elements with a stronger emphasis on clean vocals without totally dropping all other stylistic means. As the title suggests the MCD honors the Jul time and the winter solstice. In the years 2005 and 2006 XIV D.C. appeared on both of the biggest pagan metal festivals: Ragnarök festival and Ultima-Ratio festival. In 2006 the as of yet latest and most diverse album "Skithingi" came out. Skithingi tells the story of the Thuringian kingdom. The lyrics are based upon several historical traditions. This album certainly does not claim to be historically correct it rather combines history and legend. For more information concerning the lyrics a special website was created (www.skithingi.de).

Guitarist Tobalt decided to leave the band for personal reasons in late 2007. Soon Thyrs Sohn, an old friend of the band, was added to the fold as a new comrade- in-arms. The live set was rehearsed with him in order not to cancel a single gig already booked. Unfortunately this delayed the works on new material.

At present the musicians are busy creating a new album, the first songs are already written and many new ideas wait to be realized . The line-up change breathed fresh air into the songs. The new master piece „Gizit Dar Faida“ will be released October 28th by EINHEIT PRODUKTIONEN. The sound quality was improved again and the new songs are tailored more in the vein of the „Jul“ but more “anthemic” then ever before. The album will be available in a limited handmade leather bag (with a few more extras). In November 2011 there will be some release party shows with the band colleagues of ODROERIR and also SUIDAKRA, WAYLANDER, SVARTSORT & CRUADALACH.