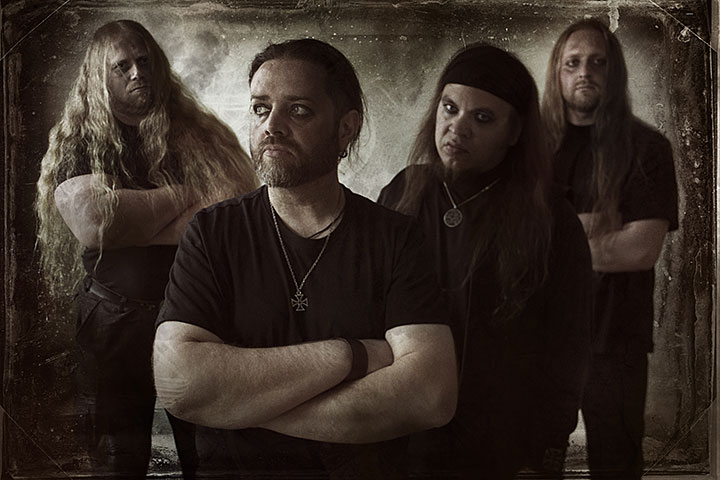 Founded in 1994 by guitarist Count Damien Nightsky and drummer Lord Asmoday these East German Black Metal veterans soon recorded their legendary first demo tape „The True Darkness“. The cultish demo successor „Das Schwert unserer Ahnen“ from 1995 was later re-released on CD. After a third demo live recording Andras put out their unforgotten debut album „Die Rückkehr der dunklen Krieger“ in 1997 – a powerful beginning with lots of public appeal in the pioneer era of German Black Metal. The grim long player „Sword Of Revenge” came out in the fateful year of 1998 and again Andras presented themselves in their most unique and vehement way. Already a year later the East German individualists unleashed their third full-length effort „Quest Of Deliverance” which was accompanied by the aforementioned CD release of „Das Schwert unserer Ahnen“. Despite a promising and diligent development the dark horde, just as many fellow German musicians, was confronted with a tiresome fact: from the earliest days on the trends of this aggressive musical style were determined by Scandinavian Black Metal acts, whom the the fans devoutly worship no matter their musical quality past or present. Therefore it took until 2002 for Andras to produce a new demo for the Black Metal guild, a forcefully self-produced release in tape format. The year 2005 brought, apart from numerous annoyingly average Black Metal releases, a true gem of the genre: „...Of Old Wisdom“. With their fourth album Andras dealt their great creative blow.

Ecthelion´s multi-facetted vocals, dreamlike melodies as well as the fully convincing instrumental and production performances made „...Of Old Wisdom“ on of the strongest efforts of the genre. This made a lasting impression on Einheit Produktionen thus the fifth Andras album was released by the established label, and the album title says it all: „Iron Way”. It was this iron way Andras took all the way from the beginning. In 2010 the "Warlord" brought the finale of their Heathen Metal trilogy. In 2013 the Andras took a hiatus caused by musical differences and health problems.

After several line-up changes the band around founder Nightsky and Ghwerig (who handled bass and keyboard duties since 2011) celebrated its renaissance in 2016, working hard on their next album in Aue (Germany). Also on board is vocalist Khenaz and also the dark warrior Black Abyss celebrates his return. After seven years the seventh album of the Black Metal veterans hailing from the German ore mountains, will be released by Einheit Produktionen. It will be entitled „Reminiszenzen...“. The CD reflects the spirit of the 1990ies in three chapters with all the experience gained in the band´s history.