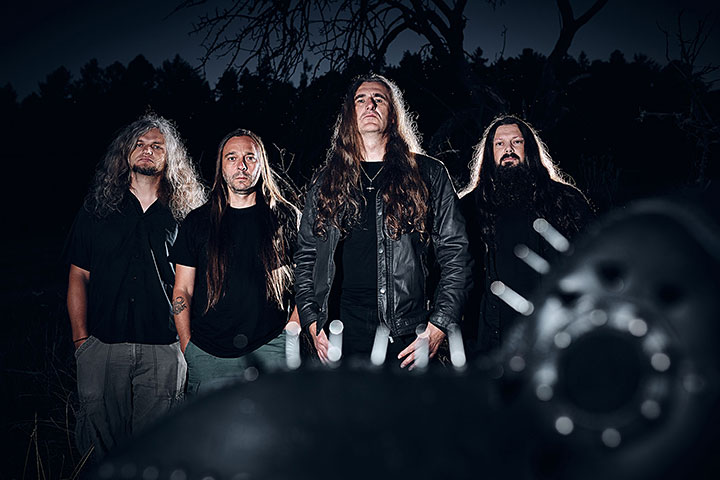 Having signed with German label Morbid Records in 2000, the self-titled MCD got released, followed by the debut full-length ‘In Blood We Trust’ the same year, featuring Mika Luttinen / IMPALED NAZARENE as a guest vocalist. The release was promoted during the NO MERCY FESTIVALS over Europe alongside MORBID ANGEL, DYING FETUS, BEHEMOTH, ENSLAVED and THE CROWN.

In 2001, the 2nd album "The Revenge Ride", produced by Harris JOHNS (HELLOWEEN, SODOM, KREATOR, or VOIVOD), was released. HYPNOS participated in events including WITH FULL FORCE, SUMMER BREEZE, PARTY-SAN and HELL ON EARTH among others. The 3rd album "Rabble Manifesto" (2005), recorded again with Harris JOHNS, got nominated for the Czech “Anděl” Award (a Grammy Award equivalent) under the Hard and Heavy category. In January 2006 HYPNOS toured with CENTINEX and PURGATORY. The EP "Halfway To Hell" was released in the 2010 and the band performed at the BRUTAL ASSAULT Fest (CZ) followed by three shows with NAPALM DEATH. Hypnos signed with the German label Einheit Produktionen, and the 4th album entitled "Heretic Commando / Rise Of The New Antikrist" saw the light in 2012. Recording duties were handled by the Norwegian sound engineer Børge FINSTAD, who worked with bands as MAYHEM, BORKNAGAR, ARCTURUS or ULVER. HYPNOS shot a video for the track ‘Inverted’, directed by Mejla BASEL, responsible for MACHINE HEAD ‘Darkness Within’ and the Czech “Oscar” Academy Award winner MARKETA IRGLOVA videos. In 2012, HYPNOS first toured with NAPALM DEATH and later with VADER.

In spring of 2014 HYPNOS supported Swedish AMON AMARTH on their East European tour. Later that year Mystic Production published BRUNO´s life-story book entitled "Revoltikon" which got sold out all 666 pieces in three months. BRUNO and PEGAS also teamed up with CHRISTOPHER from KRABATHOR to perform a reunion gig at the BRUTAL ASSAULT FESTIVAL. The success of this show resulted in a short tour over Czech and Slovakia in March 2015. The complete set recorded at the sold-out show in the band´s hometown of Uherské Hradiště was released in 2015 via MYSTIC PROD as a three-disc CD/DVD entitled "Rebirth Of Brutality".

Follower of “The Whitecrow”, album entitled “The Blackcrow” is scheduled to be released 30th October, 2020 year, as the continuation of the concept of previous album, with the focus on the dark sides of human behaviour. Same as its predecessor, experienced team of collaborating record labels, Einheit Produktionen (CD-GER) & Monster Nation (LP-CZ), will be responsible for putting this release on international market.