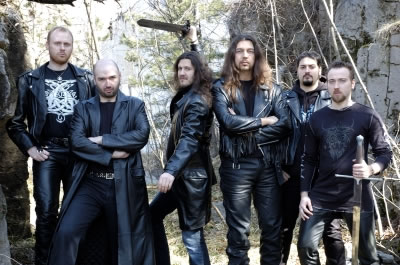 AISLING was formed in early '98 thanks to Cernunnos (rhythm guitar) and Abred (voice). In short time the band achieved a solid line-up, that included also Annwn (drums) and Gwynfyd (solo guitar).

In the summer of '99 Imbolc (bass) joined the band and in short time started the recordings started of the first demo. Before the end of the recordings the band reached its final formation with the arrival of Cythrawl on the keyboards. In December of the same year the demo came out in a number of 200 copies (soon sold-out) with the title "Endless Cycle", which evidenced AISLING's adhesion to a cyclic existential conception, typical of pagan religions. Few months later, caused by musical divergences, Abred left the band and he was replaced by Ildanach. Here started a new stylistic course for the band, now fully focused to canalise the numerous musical influences.

For two years AISLING renounced to live activities in order to compose new songs. In the summer of 2001 they started to record what will become their first (self-produced) album titled "Aisling". As soon as they finished the recordings Gwynfyd left the band for personal reasons and the lack of attitude affinity with the other members. After the release of the album Cromm (solo guitar) joined the band.

In the summer of 2002 Sidh replaced Ildanach becoming the new singer of the band; in the autumn of the same year AISLING started the recording sessions of the new mini cd. Finally in April 2003 is out "Trath Na Gaoth", the new mini cd of the band that has been produced by the label EBS. Many people figure as special guests on the songs of "Trath Na Gaoth". Unfortunately the promotion started only in the beginning of 2004.

During the spring of the same year Imbolc and Cythrawl were fired by AISLING while Annwn decided to left the band; so Cernunnos decided to continue only with Sidh and Cromm. In summer AISLING signed with Einheit Produktionen and a new line up was completed because Digal (drums), Arth (bass) and at last Gwion (keyboards) joined the band.

Finally at the end of 2005 Aisling got a solid line up with the entries of Gwynfyd on keyboards, once guitarist on 'Aisling', and the new bassist Arawn.