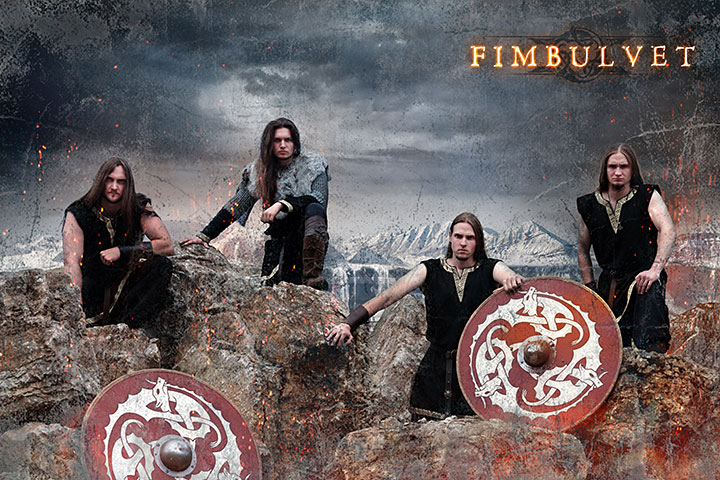 The formation was in the autumn of 2003 and in the beginning Fimbulvet was planed as a one-man-project (Stephan Gauger). In November of the same year Diana Mathesie joined on keyboards and in February 2004 Marco Volborth, an old schoolmate, on bass. A few weeks later the line-up was completed by drummer Christan Hopf, who had already played in a band with Marco. The material, which had been created before could now be refined and five new songs were finished in October 2004: „Dämmerung“, „Sonnenuntergang“, „Nebel“, „Fimbulvet“ and „Gjallarhorn“. Four weeks later these songs were recorded at the Powertrack Studio for the Demo CD „Gjallarhorn“.

Early 2005 the first live performances followed in Bad Salzungen and Schmalkalden (Germany). Due to musical differences Christian (Drums) left the band in September 2005. So did Diana (Keys) as she could not arrange the band work with her academic studies. Felix Zimmermann joined as the new drummer and after quite some contemplation we decided to continue as a three-piece, which completed band immediately. More live shows were played and in February 2006 the recordings for the debut album „Ewiger Winter“ commenced, which features 11 tracks among them two newly recorded songs from the demo. After completing the recordings more gigs followed among them the „Riedfest Open Air“. In August we played the „Welcome Goodbye Summer Open Air Festival“ in the German Erzgebirge area, which also marked the first performance outside of Thuringia. Shortly after drummer Felix had to leave the band for job-related reasons. Danny Rubner came to the rescue in October 2006, helping out as a live drummer for the remaining live shows.

Falko Knoll took over drum duties in April 2007. Approximately a year later the recordings for „Der Ruf in Goldene Hallen“ started, which was released as Digipak containing ten songs. Natalie Nebel (Odroerir) contributed guest vocals to „Heidenherz“. In 2008 we toured with Kromlek and Varg. Then the first record contract with „Eichenthron“ was signed. Early 2009 the search for a second guitar player was started resulting in Christian Fröhlich joining the ranks, transforming the band into a four-piece line-up. Before that the band played a show with Turisas on 23.01.09.

In May 2009 we switched labels signing with „Nocturnal Empire“. Already a month later the EP „Kriegerwahn“ was recorded which contains five songs in a concept frame. Several guest musicians appeared on this record: Heiko Gerull [Menhir], Stickel [Odroerir] and Ricardo Wilk). In April 2010 Marco (Bass) had to leave the band for personal reasons, but he was replaced by Steffen Mehlhorn immediately. After a few Open Air Festivals and more gigs we recorded the album „Frostbrand - Nach Flammen Sehnsucht“ in 2011. It contains ten new songs and it was made available as a A5 Digipak as well as on standard CD format. Drummer Falko left for personal reasons shortly after.

Due to an old friendship with guitarist Christian, Andreas Walter could be won for the vacant drummer position. In February and March 2012 we played our first tour („Frostbrand Tour 2012“) together with Menhir and Thrudvangar. Unfortunately Andreas (Drums) could not stay with us and decided to leave early 2013 to be with his family. Quickly a new guy was found for the drum kit and we continued with Hannes Köhler. At the turn of the year 2013/2014 we toured with Odroerir and Finsterforst on the„Rastlos Raunächte Tour 2013“. March 2014 saw another label change to Einheit Produktionen. This also triggered the beginning of the recordings for the second Frostbrand album „Frostbrand - Eines Bildnis Tracht“, which was released on standard CD as well as a A5 Digipak version with ten new songs just like its predecessor.